Hi there. This is James Weber. We’re taking some time today to talk with author D.H. Aire about his revolutionary work of Fantasy, Highmage’s Plight . Hope you enjoy!

JW: Hi there. Please, if you could give us a little bit about yourself before we begin discussing Highmage’s Plight

DH:I’m D.H. Aire. I’ve a love of history, particularly archeology. In my travels I have walked the ramparts of the Old City of Jerusalem and through an escape tunnel of a Crusader fortress that Richard the Lionheart once called home. I’ve toured archeological sites from diverse cultures that were hundreds, if not thousands of years old… experiences that found expression in Highmage’s Plight.

I was a “closeted” writer since college. I can’t help but write stories; however, the very idea of facing another rejection letter was rather daunting way back when. Then one day I didn’t care anymore. I’ve amassed over a hundred rejection letters since then and have had some success, including the publication of my first novel, Highmage’s Plight.

JW: Anything you wish our readers should know before we begin discussing Highmage’s Plight?

DH: Highmage’s Plight is the first book in a sci fi/fantasy series that was serialized in the ezine Separate Worlds and published in novel form by Malachite Quills Publishing’s Chimera Tales imprint last year. Highmage’s Plight’s sequel Human Mage was also serialized and is being published later this summer.

JW: Please explain Highmage’s Plight. You’ve termed the series an experiment. How does it work?

DH: The Plight is a blend of science fiction and fantasy, exploring ideas such as what happens when technology is mistaken for magic. What if magic trumped science, what might a world look like, and what might it mean to be human under such circumstances? The Plight is the story of a world under the ultimate threat, being suborned by an evil, which has been cutting off all hope of prophecies being fulfilled until history is changed through the power of a paradox which starts with the summoning of George Bradley, a man of science from Earth’s future, an archeologist who falls through a ripple in reality, with only the clothes on his back and his computer staff, which among other things can help him envision what a dig looked like in the past. 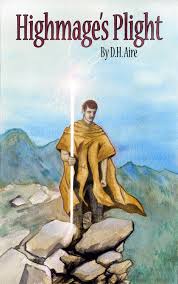 Another look at the cover!

Highmage’s Plight is the start of an epic fantasy series with a protagonist, who wants only one thing… to go home. George arrives in the world in the wrong place, fleeing the minions of the demon who wishes to destroy the human race. He crosses a wasteland, crosses mountains and the lowlands beyond, which is riddled with city-state kingdoms, in order to reach the Aqwaine Empire, a land ruled by elves and those of elvin blood. If that was not bad enough, his computer is rather sarcastic.

This is a world of prejudices, including one that knows human cannot do magic because they don’t have souls. This is a world where fate is going to bring George unlikely allies to help him survive all those who seek his life.

What makes Highmage’s Plight different on a completely singular level is that I was not trying to really get it published. I first wrote it more than twenty years ago and when I found myself out of work as the Great Recession hit, I asked myself during my long job search why my beloved books in the digital age needed to remain static. By that I mean, what if the book you read changed. What if the dialogue or a character’s actions diverged from the last time I read it? Why couldn’t a book evolve with reader input in electronic form?

So, I began serializing the Plight on Writing.com and found there was an ezine interested in serializing it. My evolving science fiction/fantasy project seeks to involve readers in new ways, but it hasn’t the audience at this point to make the next phase possible just yet. I offer a limited number of those who are interested, who purchased the book, to have a complimentary membership. At this point, they get an advanced look at the next book I’m serializing and additional stories from some of the other stories in the series. Ultimately, I want to “sell” character memberships, allowing readers to become the spirit behind a character, and advise on their exclusive character. If I agree, I’ll make changes to the evolving version, even consider adding to the storyline, whether affecting the first book or another as time goes by.

There are interactive stories, but nothing like what I seek to do with Highmage’s Plight. Perhaps it might be called an “intra-active” story, since I’m seeking to engage readers in the creative side of the story. No one else is doing an experiment like this (learn more at my website, www.Dhr2Believe.net).

Once I’m ready for the next phase, I am going to offer exclusive character memberships (for both major & minor characters) and general memberships as well (which is the currently complimentary access level now). All members of the group will need a free basic membership to Writing.com and will be able, as members of the group, to read and comment on the books and short stories posted in the series, published and unpublished.

The experiment is evolving, but those are my objectives. Writing.com, established in 2000, makes a lot of what I want to do today possible, which to me is the exciting part of trying to launch a new idea. 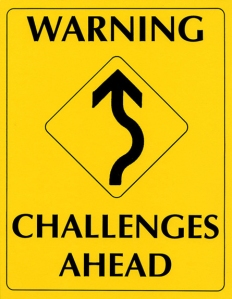 JW: How do you see your role in this project? Has it met your expectations? What has been some of the difficulties you’ve experienced?

DH: At this point I’ve only a few readers who have been interested in my promotional offer of a complimentary one year membership, which gives them access to the backend of the series. I can have 250 members presently, but can expand to 2,500. I never expected the series to find a publisher so quickly once I began the project. I’ve even written another series, Dare2believe, a young adult urban fantasy based on the idea of fans becoming their exclusive characters and turning into trolls, ogres, elves, etc. Suddenly they can do magic… and the world as we know is coming to an end.

Ultimately, it will take a significant audience to make an evolving story approach like what I’m experimenting with work. That’s going to take time and a commitment on my part in building an audience, which means writing, writing some more (including articles on my learning experience as a writer), going to sci fi and fantasy conventions, and networking as much as possible. I’ve gotten some great advice on what challenges my little project faces and ideas as to what I have to commit to in order to try to make it work. It’s led to my featuring the opening chapters of Dare2believe on Wattpad.com, a free website used by millions of young adult readers. Dare2Believe is basically Gulliver’s Travels meets Urban Fantasy and is available at: http://www.wattpad.com/story/5048546-dare2believe.

JW: There is a sequel coming out soon? When will it be published? Any difference in the process?

DH: Human Mage is currently being copyedited for publication and, if I say so myself, the first sample drawings for the cover art are “cool.” It should be out around Labor Day Weekend. The next sequel will begin being serialized by Separate Worlds in August. I’m hoping to see it released at the end of 2014. 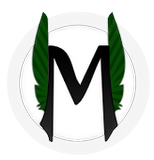 JW: What is your experience working with publisher and imprint?

Malachite Quills is a small press, established in the fall of 2011. The Plight is one of the first books they published. They’ve grown into several imprints and the Plight is published under their fantasy imprint. Spectacular Publishing released an anthology at the same time as MQ published the Plight. Their anthology, Flights of Fantasy, Vol. 1, featured a number of my short stories and the opening stories of the Highmage’s Plight. They love Human Mage and approached me to see if they could publish and MQ concurred. So voila’ the ebook and print-on-demand editions will be available shortly.

JW: Any authors that influenced your work? Specifically Highmage’s Plight? The series as a whole?

DH: Among the many authors that influence my work are Marion Zimmer Bradley’s Darkover Series, Anne McAffrey’s Dragonriders of Pern, and Roger Zelazny’s Amber Series. You’ll also see that Charles Dickens, Alexander Dumas, and J.R.R. Tolkien have taken a toll on my psyche.

JW: What aspects of the story are you most proud of?

DH: I love turning the tables on the classic stories. For example, I’ve got liveried sword wielding warriors (musketeers of a sort), who are all women; trolls who think they are human; and an ogre who’s a good guy at heart, just trapped by circumstances, poor guy. But what I’m most proud of is George’s relationship with his sarcastic computer alter ego, Staff, and his “family.” Together, George and Staff make quite the human mage. Together with his friends, George makes quite a human being.

JW: Are you working on any other writing at this time which is not involved with Highmage’s Plight?

DH: I’ve a two book space opera I’m hoping to see published in the next year or two called The Terran Catalyst and lots of short stories like Crossroads of Sin (a time travel tale), which appears in the anthology RealLies.

JW: Any closing remarks or thoughts which you would like to give to our readers? Also, Unicorns? Anything juicy behind that? 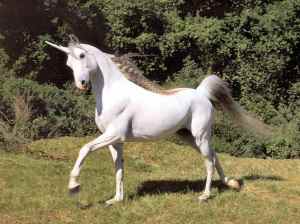 DH: My motto is “Dare to Believe.” As a writer I’ve dared to believe in myself, knowing I’ve plenty of challenges ahead of me. I believe that’s true for all of us at one time or another and if I hadn’t, I’d never have published a single short story or Highmage’s Plight.

Okay, why a unicorn, you ask? You’ll have to read the series to find out… or you could read my Dare2Believe series to find out. Fine, Dare is completely based on the Plight, not just the idea of the evolving story experience run amok. That’s a plus in my book, particularly since those pesky characters seem to think playing in our world might be fun…

In other words, I write because I love to and, well, not writing drives me crazy. All I can say is, Dare to Believe.