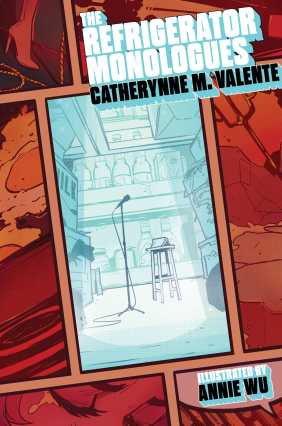 I hate it when reviewers simply summarize what they’ve read, but honestly I’m not sure how to talk about this book without giving some kind of background, so I’ll give you the premise instead. Essentially, Catherynne M. Valente has written a parody of our most beloved super heroes, but instead of focusing on the men-in-tights, she gives us the stories of their dead lovers.

Why Should I care?

Well for one, it’s pretty amazing. These women’s stories are angry, sad, stunning, whimsical, nostalgic, pitiful, miraculous, inspiring, morose and so much more . . . all at the same time. In a post for Mary Sue, Valente gives her inspiration for the book (apparently, Spiderman 2, cuban cocktails and Gail Simmone’s Women In Refrigerators) and describes her own work as:

” . . . putting the calligraphy aside and just punching a page over and over until it breaks.”

That sentence alone is an example of the precision and awareness Valente can bring to her words. She does so throughout the entirety of The Refrigerator Monologues.

If you’re a comic book fan, you’ll probably enjoy the crap out of spotting these unique, and often silly, analogues to MC and DC universes (Valente had to create her own entirely different universe). If you’re not a huge fan of comics? You’ll probably still get a kick out of it. All the majors are pretty mainstream now, and even a lot of the minors are in the public eye. You’ll know what’s going on.

But you said it critiques comics . . .

. . . and in a lot of cases it does so harshly. With this in mind, it might be easy to pass up.  After all, who wants to read a book that just condemns a thing that they love?

Please don’t pass it up.

It’s obvious that while Valente recognizes a lot of problems in the ways women have been represented in comics, she still loves them. The stories are carefully (and excellently) written. They are clever in their characterizations, tone, and story arcs. This can only come from someone who truly cares for the genre.  I think my favorite is the 2nd story, about Julia Ash, but each one I read, I though “Oh so-and-so would get a kick out of this one” or “Wow. I wish [Insert ‘I-have-friends‘ name] had read this. S/he would love it.”

It doesn’t take much to see there is a bit of a feminist thing going on in “Geekdom” (I’m really understating this lol) and I think this is, and will be, an important part of whatever ‘Geek Feminism’ evolves into. In my (irrelevant) opinion it is certainly a worthy addition. I hope that we all go out and read this book now, and that in 10 or 20 years (hell maybe 5?) people will be assigned this in their literature classes.

So go read this one. Talk about it with your friends. Post about it online. And leave me your thoughts in the comments. 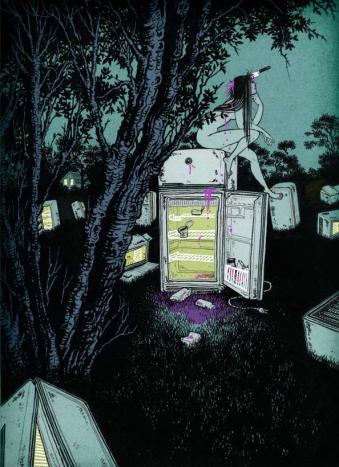 Also, don’t hate me for knocking off The Skim in writing/formatting this post. It just sort of happened.

UPDATE: I always end up doing this in a way that isn’t a true update but whatever. If you want to check out another story (a free one) that deals with women and refrigerators, please go check out Sunny Moraine’s eyes I dare not meet in dreams which Tor.com has recently posted. Apparently, it was posted at another website back in 2015 but now it’s Tor’s. It is very different in tone, meaning and style, but I think Moraine’s reaction to the Women in Refrigerators trope is as important as anything else I’ve written on this topic. Also, Lady Business seems to have done a good job explaining everything if it’s at all weird or confusing. Ok. Carry on!