2016 has been a fun year for for me reading. I read 21 books, which doesn’t seem like very much when I think about it but I do feel like the books I attempted this year seem to be very long. The longest book was A Wise Man’s Fear coming in at 994 pages while on average the books were 366 pages. So A Wise Man’s Fear was like 3 books. Goodreads has done some cool stats on my year of reading which is awesome. You can check that out here.

I took it upon myself to do some other stats. I’ve felt for a long while that I do not read enough new books. This mainly comes from the fact that every year, when awards start coming around, I don’t know what any of the books are. In 2016, I tried to read a lot of books from previous year’s awards (mostly 2016 Hugos) but I’m not really sure if that worked well. Turns out I read more stuff published in 2016 then other years, so that’s cool. I hope to read more books published in 2017 during 2017 but we’ll see. 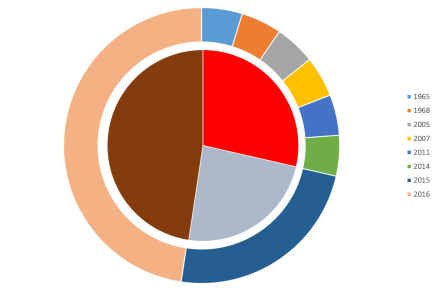 The books I’m most looking forward to in 2017 are:

After that, I’m not really sure. We’ll just have to wait and see. You might have noticed, that already my 2017 list is looking a little one sided. If you know of some female authors coming out with books in 2017, please leave em in the comments section.

To another year of awesome reading 🙂

UPDATE: I know updates are supposed to happen after you publish but it seemed the original post should stay intact even though I found at least two more list of books that have made me super excited and the fact that I just hadn’t hit publish yet seemed irrelevant. It’s still an update hahah. Ok here we go . . .

First list is the 9 modern women science fiction writers you need to be celebrating. A coworker sent me this list (you know who you are) and it looks amazing. And it’s a step towards my goal of reading as many women as men. So far the authors on this list that have books coming out in 2017 are:

The 2nd list is the 96 books Sci-Fi & Fantasy Editors Can’t Wait for You to Read in 2017. Obviously I can’t read everything on this list but here’s what I want to try to read: