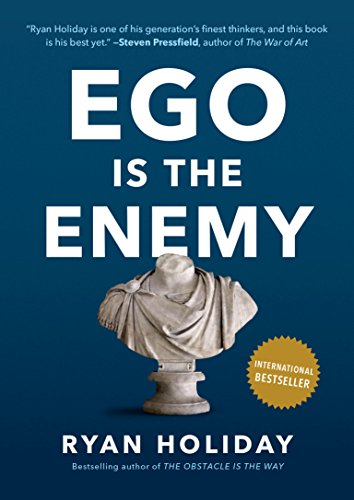 **As I wrote this review, I realized that it turned into something else entirely. So for those who are here for the review only, the cliff notes are:

Growth Hacker Marketing, was a quick read and a very interesting look at a topic that I knew next to nothing about: Growth Hacking. I unfortunately could not make use of the wisdom imparted in its seemingly short amount of pages (or perhaps didn’t try hard enough), but recognized its usefulness and I believe it did inspire me to change my thinking a bit in terms of work.

Finally, I read The Obstacle Is the Way, and was thoroughly disappointed. It seemed to me, a bunch of nonsense and aphorisms that were only just barely covering up a kind of weird fascination with Stoicism. It was not what I wanted. It was not the Ryan Holiday I imagined in my mind. The man that would climb up onto a billboard and vandalize his client’s own ad to get some extra publicity. It just seemed so out of character.

Unwilling to give up faith, I began following Holiday on twitter and signed up for his newsletter. He seemed to be well read if nothing else (I feel like Holiday had something to do with me discovering Austin Kleon’s work which has also affected me greatly . . . twice!), and maybe I could learn something from stoicism after all. I’m not sure whether I have or not — I gave up on Marcus Aurelius’ Meditations after a few pages — but when I saw the announcement that Ego Is the Enemy would soon be released, I was still excited. I’m not even sure why, but I was.

I elected to try and get it from a public library which took a LONG time. It is apparently very popular already without my review. But when it finally arrived I put down whatever else I was reading and gave it a shot. It seems similar to The Obstacle Is the Way, but somehow very different. Their is quite a bit of quotes in the book, and many from Stoics (Ancient Greeks mostly), but there was also a bunch of material from modern figures. Somehow all of the stories seemed more relevant than Holiday’s previous book.

And it wasn’t just the stories that made the book great. It really goes deep. Like what-is-your-purpose-in-life deep (that is 100% the name of at least one chapter). But Holiday’s writing style is such that it doesn’t feel cliche or shoehorned. It’s realistic. It’s “You don’t have to be like the people in this book, but you do have to be something. What will it be?” I feel like we all get this question a lot. From our parents, from our friends, from ourselves. However, when Holiday asks it, it feels encouraging. Empowering somehow.

After reading this book I will certainly be thinking about it.