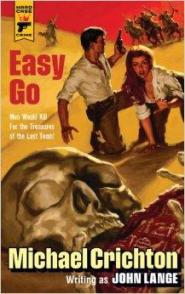 Michael Crichton’s Easy Go was both a pleasure and a let down to read. The book was originally published under a pseudonym John Lange, and with the title The Last Tomb. I first became aware of “Easy Go” (and John Lange) through a Humble Bundle mystery bundle in which it was included. Though none of the other books in the bundle seemed remotely interesting, I just couldn’t wrap my head around the fact that Michael Crichton had a pseudonym . . .

And that I didn’t already know about him!

I mean this was MICHAEL CHRICHTON!!! The author of some of my absolute favorite books! Sphere, Timeline, State of Fear, Next! For god’s sake, he wrote Jurassic Park!!

Hell, I even enjoyed Pirate Latitudes although it was a bit of a left turn for Crichton. But this whole time, John Lange has been lurking out there, waiting. And no one bothered to tell me. Le sigh.

Anyway, I looked up the synopsis and Easy Go promised adventure and danger, and romance. Honestly, it all seemed a bit more like one of those old pulpy adventure novels than a true Michael Crichton book. However, Crichton is an amazing author and I figured if anyone could do this right it was him. Plus the story takes place in Egypt and is about digging up a tomb. It’s exactly this setting and premise that I’ve been itching for modern authors to write but alas am unfulfilled. 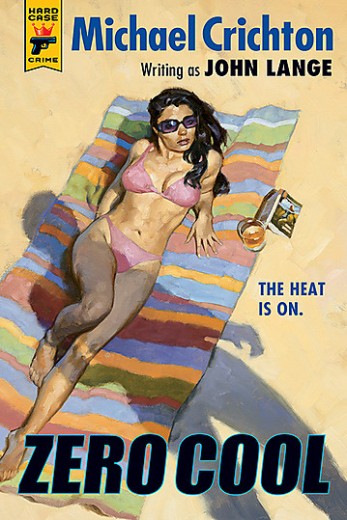 So how was it? A bit of a let down. While the synopsis had made it seem like one of those old pulpy adventure novels, the actual novel confirmed it. Most of the characters in the novel are hardly characters at all. They fill roles, and exist mostly to get the protagonist to the next portion of the plot. And there is no attempt to hide this from the reader at all. One of the characters, upon meeting another character, is like “Oh. You must be the [enter heist role hear] “.

Also, there were some little things throughout the novel that made it really feel dated. I think the most glaring was the way women were depicted in the novel. Almost every woman in the novel except the main love interest was a prostitute. The pretty much constant innuendo between the male and female lead was bordering on exhausting (although there is a line from the female lead which calls this out. After the male lead makes some mildly suggestive quip she says something like “Wow. You’re so corny.” or some such nonsense).

I really threw in the towel when Lisa (the female lead) lights a cigarette for Pierce (male lead) and it’s noticed how capable she is at this task: “like a man”. Good lord. Kill me now.

However, it wasn’t all bad. Crichton seems to have done his research about ancient Egypt (though his depiction of modern Egypt seemed a bit stereotypical). So far as I can tell, all the pyramids were in the right place (I’ll be honest though I didn’t fact check) and a significant number of pharaohs are mentioned. It was this part of it that made the book feel the most like a Crichton novel. The rest of it was . . . disappointing.

In all I enjoyed the adventure as well as the fact that it had something to do with Ancient Egypt. As for the rest, I can see why he chose to write under a pseudonym though it’s a wonder he chose to write that way at all.