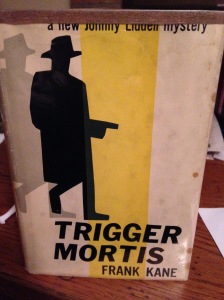 I don’t like to post negative reviews on A&A, but I was pretty disappointed by this one. After all, the first sentence reads: “She was stacked.” I don’t suppose that it is obvious what the role of women will be within this novel? And I further suppose I should have guessed what I was in for based on the title of work. I chose to ignore it.

I picked this one up after hearing it shared the title with upcoming 007 novel by Anthony Horrowitz. The 007 franchise is somewhat renowned for their bad puns, wordplay, and quips and I’m still genuinely excited for it to come out. I had hoped that maybe the same type of ‘knowing humor’ was being used here. After reading Trigger Mortis, I’m not sure it was. Whatever was going on, I sincerely hope that what I’ve read here (by Frank Kane I mean), is nothing like what I’ll be reading on September 8th.

First, Kane does spend some time describing his characters physically, but the problem is, they all look the same. I think I read about 50 pgs, before I was consciously aware of a character that doesn’t have red hair (except Liddell although I don’t know if we ever get a good description of him).

Pretty much all of the women characters exist as sex symbols. Celeste Pierce (just let that name sink in) is the only woman with any motivations in the novel (indeed, she gives the call to action) but she is perfectly happy to let Johnny do all of the work. Celeste does so little it hurts.

The book was published back in 1958, so perhaps we can chalk some of this up to a different era with different sensibilities. Still it was disappointing. I suppose I should give some credit to Kane though. I did not figure out ‘who dunnit’ until the last chapter. I probably enjoyed the last chapter the most as its reliance on mystery convention (Liddell gathers all the suspects together before revealing who the killer is) felt ‘right’.

Even so, a quick google search shows me that there are 28 other Johnny Liddell mysteries. I don’t think I’ll be reading any of the others.