True story. Sometimes you need something heavy to think about. If you’re in that sort of vein, I recommend William Faulkner’s The Bear. There’s a lot to swallow. Probably more than one blog post can suffice to say but . . . I want to talk about it anyway. I found The Bear in a summer English class, about two years ago. We were reading all sorts of ‘Literary’ books and stories. The Souls of Black Folk by W.E. Dubois, some poetry by Frost, and something by Joseph Conrad though I don’t think it was Heart of Darkness. I read that when I was younger and wished I’d had a professor there to help explain it to me. Still do.

Now, two years later I found myself thumbing (well I guess scrolling) through its pages a second time. I was taught in class that it was about ‘Modernity’ with a capital M. I find myself searching for meaning in that word even as the young boy hunts for Old Ben in the woods of the great . . . wherever. I still haven’t found him. I’ve crossed paths with ‘Modernity’, recognized its trail and ran its woods a thousand times but I don’t seem to be any closer to bringing home the kill.

As I read it this time, one passage really stuck in my mind:

“There was an old bear, fierce and ruthless, not merely just to stay alive, but with the fierce pride of liberty and freedom, proud enough of liberty and freedom to see it threatened without fear or even alarm; nay, who at times even seemed deliberately to put that freedom and liberty in jeopardy in order to savor them, to remind his old strong bones and flesh to keep supple and quick to defend and preserve them.”

Now read that passage again and take a shot every time you see the words ‘freedom’ or ‘liberty’. Am I right?

All joking aside, I feel that this quote is in a lot of ways ineffable. I imagine the wilderness this bear must live in. It’s complete and utter disregard for rules or regulation (civilization?) because there aren’t any in sight. A time before the land was developed, sectioned off, built up and disastrously torn down. Before modern conveniences like roads and computers, Twitter or Facebook, cell phones and television.

It also says something to me about competition. The Bear is “playing the game” to its fullest potential. At war with those who would try to capture its independence and limit its fulfillment. I think this exists in the world we live in today with all of the modern convenience mentioned before (note that I’m not trying to argue any sort of lifestyle in which we give up these conveniences; I love them). To me, those boundaries seem like a new wilderness through which the bear must run and through which men will hunt and attempt to capture him.

I also find the hunters in this story interesting too, because in my mind they are the same as the Bear. The reason they hunt is to push the same boundaries and fulfill the same need as their target. To push themselves to life’s limit so that they may better appreciate that life and those limits. To give them motivation to reach and succeed at new challenges. It’s just the same as that which they hunt. It seems to me a very American mentality. Good thing the 4th’s tomorrow.

There is definitely more to this story. Of course there is more meaning in this story than can be properly expressed with another hundred posts of this quality, but I think this short was included in a larger work by Faulkner called Go Down, Moses. I seem to remember them capturing the Bear and a rather sad eulogy to follow. I also seem to remember another story which made me think that I was no less a man if I poured water into my whiskey . . .

I think I’ll be talking more about Faulkner in the weeks to come. Until next time . . . 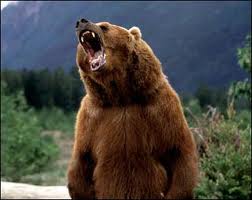