It’s that time again. Time to talk about some short fiction. This week’s pick is Phoenix by Chuck Palahniuk. This story was published back in February through Byliner Inc. and I’m finally getting around to reading it. Anyway, let’s just go into it. 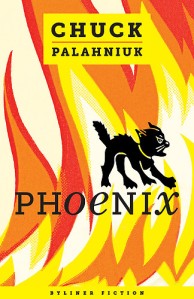 Let me just say, I had pretty high hopes for his single. Chuck Palahniuk is one of my favorite authors. Fight Club is probably my favorite book and certainly one of my favorite movies. I first saw the movie when I was in high school and I must have watched it a hundred times since then. Of course I read the book (duh already said that) and then decided that I needed more. Read Choke. Probably my next favorite book. Read Survivor. Then Haunted, Rant, and most recently Tell All. I was soaking em up. And then it happened . . .

I just didn’t read any more of his books. It would be interesting to see what else I was reading at the time which eventually over shadowed Palahniuk but I don’t know there is any good way to do it. I looked at Goodreads but unfortunately it appears I like to add things in batches which means books I’ve read months apart are added at the same time.

Needless to say, I was needing a reboot (kind of similar to how I felt with WOT). Something to get excited by. I had seen Damned in the book store, and before that Pgmy and Snuff. But I never read them because I felt it was all starting to read like the same book. But I saw Phoenix in the Kindle Store and thought “Well maybe this will be different. It’s got a cute little cat on the cover and some bitchin’ looking flames. Could be alright.” 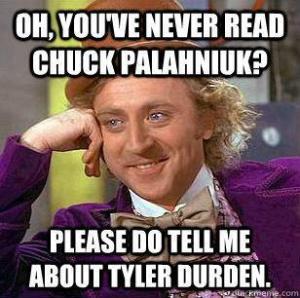 Unfortunately it was not the reboot I was looking for. Essentially the story runs something like this. There’s a troubled marriage. A kid on the way. Nobody is coping the way they should. Some Arson. A flaming cat and flaming cat shit, which depending on your mode of thinking is horrifying or hilarious. I won’t try to argue one more than the other; to me it’s both. And of course random sex noises with  no conceivable relevance to the story (that I could tell). I did have to laugh as the main character, Rachel, seems to have a moment of self-awareness towards the end of the story. I was laughing because Palahniuk seems to have a moment of self-awareness too. The line reads:

“The people will always be humping next door. The burning cat will always be rocketing like a comet around every house in which they ever live. Nothing will ever be resolved.”

If you go to his blog you can read about the how the story came to be and how hard he worked to push himself for this story. I guess I just was thinking he would push further. Really break away from his mold. Not just the mechanics of the story (1st person instead of 3rd etc.) but push the content further. See where that takes him. I bet it would be a nice change of pace.

Now, it sounds like I’m be super tough on Chuck, and I don’t mean to be. He’s still one of my favorite authors. Perhaps I’m the one who’s changed since I read all those books so many years ago. But I’d be interested to see where a little change would take his writing. I’ll still be following him. Might even try to go back and read some of the ones I missed. But I just have to remind myself that I already know what kind of story I’m going to be getting. I’m not going to be seeing any re-invention in his writing . . . at least not yet.